Capacitor Selection and Application of S-Meter in uBITX with Nextion LCD (Version 1.095 Improvements)

July 04, 2018
Capacitor Selection and Application of S-Meter in uBITX with Nextion LCD


This document is intended to illustrate some of the features added in CEC Firmware Version 1.095, Version 1.095 has been released. (http://www.hamskey.com/2018/07/ubitx-firmware-cec-version-1095beta.html)
Several features have been added in Version 1.095, Most of the improvements will be covered in the deployment article. 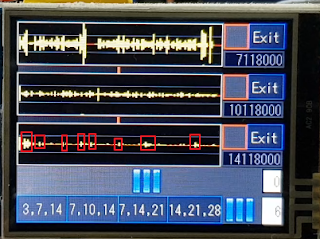 1.S-Meter and uBITX Firmware CEC Version
uBITX CEC firmware is based on uBITX, which has not been modified.
but, In order to view signals from Character LCD or Nextion LCD, Signal Meter Sensor must be installed.
Of course, CEC Firmware operates normally even if S-meter sensor is not installed.

The S-Meter sensor is optional.

There are many ways to create S-Meter sensors. And most S-Meter sensors are compatible with CEC Firmware. Please refer to the link below for instructions.
http://www.hamskey.com/2018/05/setting-smeter-to-ubitx-with-cec.html

uBITX CEC firmware must set values for S-Meter in uBITX Manager.
This is the method for using most S-Meter sensors.

2.Selecting a Capacitor for Use with the S-Meter
I posted how to make an S-Meter sensor using the LM358.
http://www.hamskey.com/2018/06/creating-simple-s-meter-sensor-for.html

I wanted to make fun with S-Meter which can make 5 parts.
Most of these functions are only for Nextion LCD (include TJC LCD).

The basic structure of the S-Meter is to charge the capacitor with electricity and read the charged amount from the ADC.

I will explain how to select Capacito in S-Meter and the functions added in Version 1.095.

I made the capacitor as replaceable as shown in the picture below and observed the operation according to the capacitor. 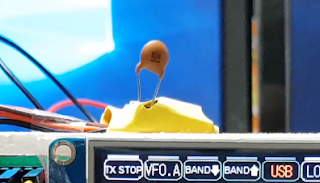 To observe the variation of the ADC, we use ADC Monitor which is supported from Version 1.094.
Touch the 'CW Information Panel' 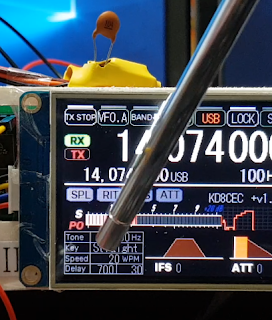 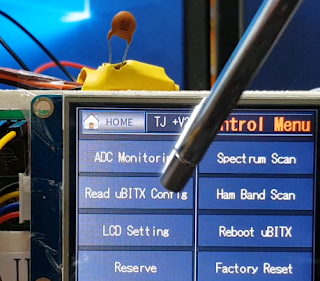 The figure below shows a graph using a 100nF capacitor (marked 104)
We can see that the discharge is slow even after the signal disappears. 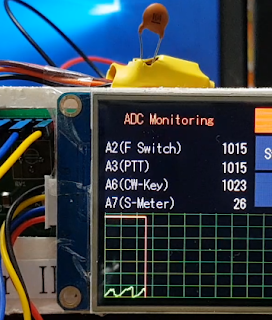 The figure below shows a graph using a 10nF capacitor (marked 103)
Is there a difference from 100nF? 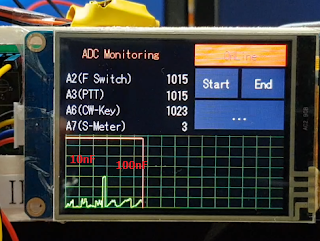 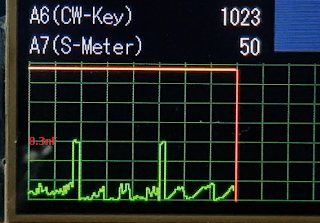 If it is used below 0.2nF, normal measurement may not be possible.

I decided to use 0.3nF on uBITX with Nextion LCD

3.Multi Band Scan
It is a function to scan the ham bands quickly. This makes it a little more convenient to find Active Frequency.
I do not know if this is useful, but it's fun. 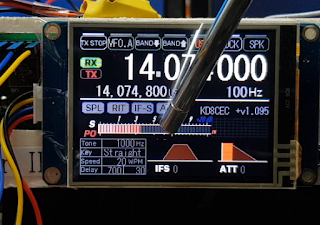 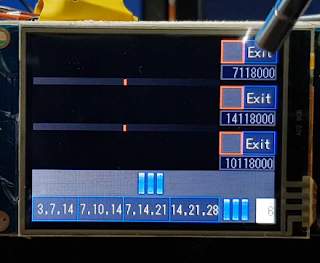 There are three buttons on the right.
Press the button marked 'Exit' to return to the main screen

After a while, the graph will be displayed as shown below. 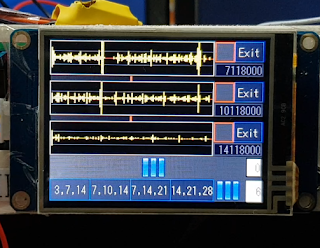 It took me about 0.7 seconds to scan a ham band when I experimented. So I made it three scans per band.

Let's check the scan results based on 14MHz.

In the figure above, there is a signal in the red squares

You can directly receive the frequency from this screen.
Touch the check box on the right (14Mhz Band)

The screen will change as shown below. 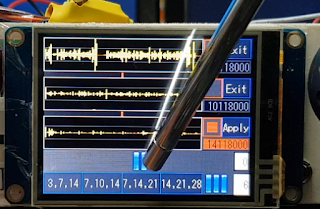 Try moving the slide
when the slide moves the frequency bar will move together, The frequency on the right will also change 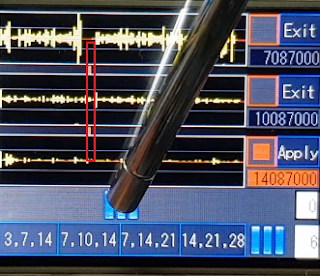 You can receive the signal by moving the bar to the part where the signal is as shown below. 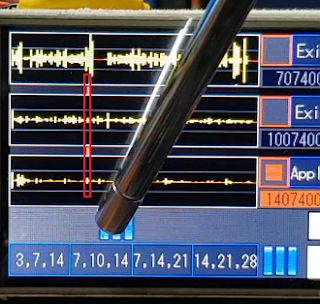 At this time, pressing the Apply button will set the received frequency to the current frequency and return to the Main screen

3.Spectrum Scan
This function is to scan adjacent areas based on current frequency
I'm not sure if this is useful either, but it's fun. 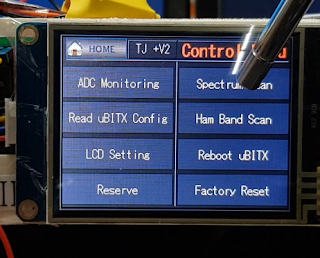 You will see the following screen, This screen is Spectrum scan.
The current frequency is displayed at the top center of the screen
1397745 on the left is the starting frequency for scanning, You can see that the range is quite wide 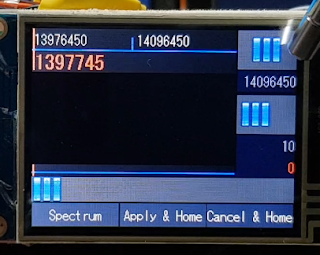 Because the 1397745Mhz is not a ham band, the scan results will be useless
Let's move the center frequency a little bit. 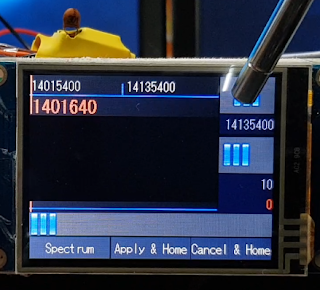 If you set the desired frequency range as below, touch the Spectrum button 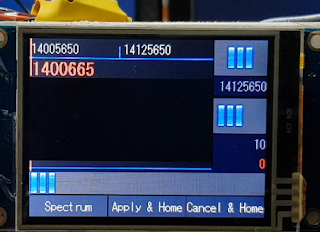 You can see the progress as below. 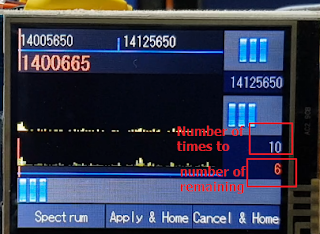 When all the scans are completed, the following graph will be displayed 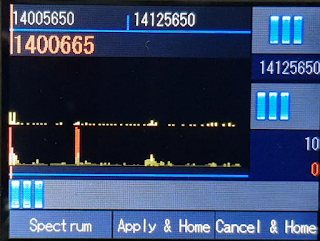 You can listen to the measured frequency directly by moving the slide below.
Press the 'Apply & Home' button to return to the main screen after the currently received frequency is applied 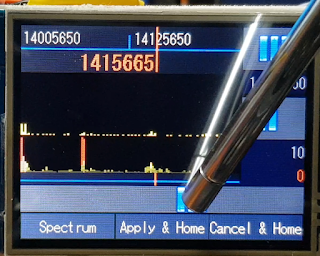 The video below is an image taken to create this document. All examples are included

If you have an S-Meter sensor, please wait a day or two, Version 1.095 will be released.

Thanks for reading
Ian KD8CEC

April 02, 2019
Release CEC Firmware v1.200 for uBITX All Version (include v2, v3, v4, v5) I did the firmware work for v5 when uBITX V5 was released, but I release it now. I received the feedback from a thankful beta tester and tested it myself by converting my uBITX v3 to v5 but I was not sure. I ordered the uBITX V5 and delivered the correct uBITX V5, so I made a little more fine-tuning. If you use V2, V3, V4, you do not need to update this firmware.
178 comments
Read more

June 24, 2019
Release EU1KY AA Firmware CEC Version 1.01 and 1.0a It is the stabilized final version of EU1KY AA. Updates starting with Version 0.1 continue to add features. Please refer to the link below for added features. I have separated the Version to 1.01 and 1.0A for users who want to use AA only for instrumentation purposes. *  If you want to use all the features added up to Version 0.71, please use Version 1.0A. *  If you want to use it only for instrument use, please use Version 1.01 Version V1.0A Version V1.01 1.Download Firmware Version 1.01 and 1.0a https://github.com/phdlee/antennaanalyzer/releases Version 1.01 (Version with only antenna analyzer function) https://github.com/phdlee/antennaanalyzer/releases/download/v1.01/AA_CEC_V1.01.zip Version 1.0A (Version with all features added up to Version 0.71) https://github.com/phdlee/antennaanalyzer/releases/download/v1.01/AA_CEC_V1.0A.zip ConvertRXP (Converters for using AA measurement data in other tool
142 comments
Read more