If you are already using S-Meter, you do not need to view this document. This document is for those who do not have an S-Meter Sensor or want to use some of the features using S-Meter on the Nextion LCD. There are various ways to attach S.Meter to uBITX. You can find things on the Internet that are far superior to what I have created. 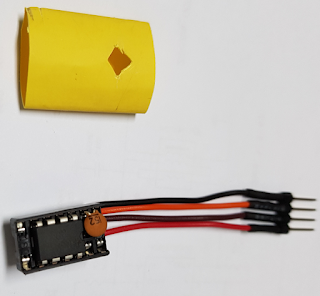 uBITX Firmware CEC version is based on unmodified uBITX. However, to see the strength of the received signal, you have to attach the sensor. Of course, there is no problem in using CEC firmware without a signal meter sensor. Most people I know have not installed an S-meter yet.

I was suggested to make an S-Meter Sensor using the LM358 which is a bit cheaper than the LM386. This circuit is a modification of the basic form of the OP-amp, which is very common. This model set the offset voltage to 0Volt. (The previous version using LM386 was 2.5~3Volt),  So one more part was added and five were used.


2.Schematic
The LM358 has been rotated 90 degrees. attention to the Pin number. 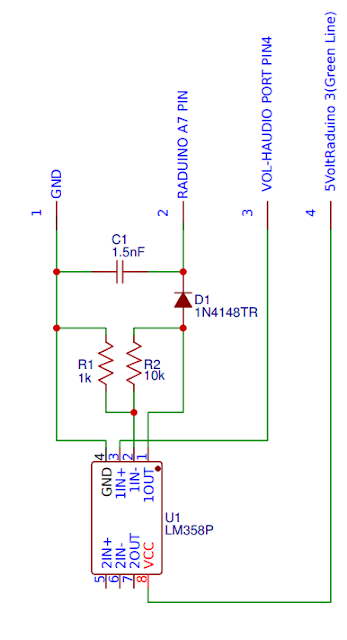 3.Wire UP
The figure below is 'uBITX Wire UP' at hfsignals.com. I added a number to connect to it. (Red color number) 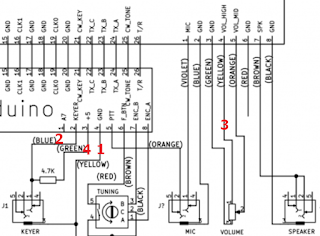 I made it again with IC Socket. 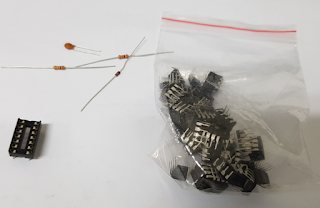 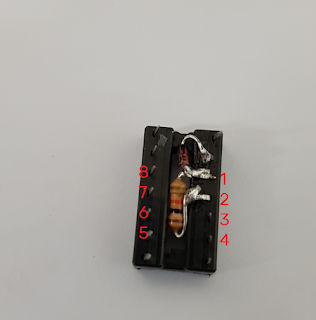 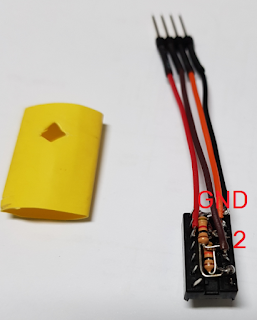 I have made it possible to replace the capacitors as shown below to do some experiments.

It is the final finished.

5.Conclusion
Maybe if you use C1 at 1.5nF, the S-Meter may not be accurate.
In this case, if you replace C1 a little bigger, it will probably work stably.
However, if you are using Nextion LCD or TJC LCD, we recommend 1.5nF. In the next beta version, I will introduce some fun features using this S-Meter.

My plan is to introduce one or two different versions of S-Meter in the future.
It costs maybe $ 3 to $ 9, but it is not expected to be so difficult to make.

April 02, 2019
Release CEC Firmware v1.200 for uBITX All Version (include v2, v3, v4, v5) I did the firmware work for v5 when uBITX V5 was released, but I release it now. I received the feedback from a thankful beta tester and tested it myself by converting my uBITX v3 to v5 but I was not sure. I ordered the uBITX V5 and delivered the correct uBITX V5, so I made a little more fine-tuning. If you use V2, V3, V4, you do not need to update this firmware.
186 comments
Read more

June 24, 2019
Release EU1KY AA Firmware CEC Version 1.01 and 1.0a It is the stabilized final version of EU1KY AA. Updates starting with Version 0.1 continue to add features. Please refer to the link below for added features. I have separated the Version to 1.01 and 1.0A for users who want to use AA only for instrumentation purposes. *  If you want to use all the features added up to Version 0.71, please use Version 1.0A. *  If you want to use it only for instrument use, please use Version 1.01 Version V1.0A Version V1.01 1.Download Firmware Version 1.01 and 1.0a https://github.com/phdlee/antennaanalyzer/releases Version 1.01 (Version with only antenna analyzer function) https://github.com/phdlee/antennaanalyzer/releases/download/v1.01/AA_CEC_V1.01.zip Version 1.0A (Version with all features added up to Version 0.71) https://github.com/phdlee/antennaanalyzer/releases/download/v1.01/AA_CEC_V1.0A.zip ConvertRXP (Converters for using AA measurement data in other tool
177 comments
Read more