The 0.27 version added some features to the 0.25 version and bug fixes.
Version 0.27 is planned to be changed to Version 1.0 only with no further function.
I think most of the essential functions of the HF radio I think have been implemented.
So now I want to start another project. Still, bug fixes and minor features will be added sometime. In other words, the source will not change much, so if you use the source, you may use this version.


The following features have been added to the 0.27 version.

This is a video that only features added in version 0.27. also included setting up various functions using uBITX Manager from installation.

The CEC firmware for uBITX has become more and more usable with uBITX Manager.
The above video and the contents of the blog can be used enough, but I will post it again as time permits.

Please refer to the link below for how to install the firmware.
http://www.hamskey.com/2018/01/how-to-upgrade-ubitx-firmware.html

When uploading, make sure 23266 bytes uploaded appears as below. 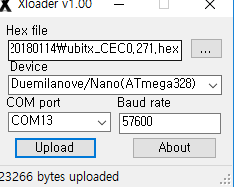 For firmware 0.27 or later, you can set the ham band as shown below.
This is convenient for uBITX when you move the band. In countries that regulate the transceiver's transmit frequency, set the 'Tune TX Type' to 102.
So uBITX can be used in most countries.
Or in a free country such as the United States, set 'Tune TX Type' to 2.
It is only a convenient band movement using the ham band.

TIP : Select 'Band Select?' When you press and hold the function key, Band Selectin mode is released or toggle. 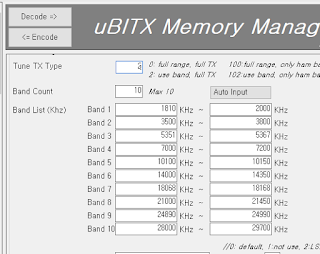 
I received uBITX a month ago and found that many features are required, and began coding with the idea of implementing minimal functionality as a general hf transceiver rather than an experimental device.
Most of the basic functions of the HF transceiver I thought were implemented. The minimum basic specification for uBITX to operate as a radio, I think it is finished. So release the 0.27 version and if I do not see the bug anymore, I will try to change the version name to 1.0.
Now uBITX is an HF radio and will be able to join you in your happy hams life. Based on this source, you can use it by adding functions.
I am going to do a new project based on this source, linking with WSPR, WSJT-X and so on. Of course, this repository is still running. If you have any bugs or ideas, please feel free to email me.
DE Ian Lee, KD8CEC