This article shows how to solve problems for new programmers. I do not think my method is the best. I think that it is one of various ways to solve an issue.


A program called WSJ-X started to become popular.
It was a great program. even the program is open source based. 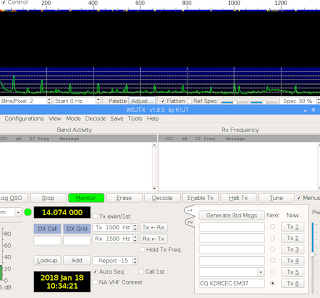 I was curious about the protocol. I also saw related papers and analyzed the source.
Actually, I did not do anything for two months while analyzing the source.(very fun, very exciting, like movie back to the future) After analyzing the JT-65, the FT8 was a little easier.
Can I run this algorithm on a smaller machine too? The idea was to modify the FFT algorithm. The FFT algorithm has been modified slightly to successfully process 2048 arrays for jt65, ft8 decoder. It can be done in DSP if 2048 unit FFT processing.
However, a new project has begun and I have been holding it for a few months.
Let's just do the wsjt-x story, because I'm planning to post about jt-65 and ft8 in the near future.

Then again something interesting to me showed up. It was uBITX. 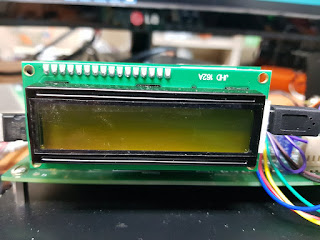 How about connecting raspberry pi to uBITX? Could be awesome.
I thought it would be fun if a small transceiver could run jt65, ft8, wspr, etc. independently. uBITX is a fairly small size, so the raspberry pi with 3.5 lcd is perfect for built in here. 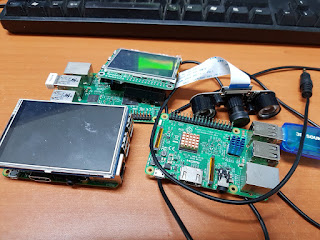 I had to customize wsjt-x so that it could be used on a small screen.
agian said, I like wsjt-x the best. So I thought wsjt-x first. Because of wsjt-x, I restarted the amateur radio.

First, I built a development environment in Raspberry Pi. (I'll post it later.) 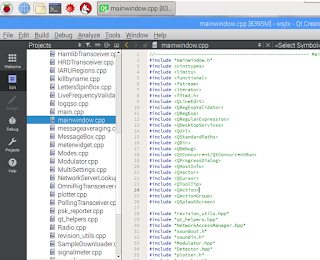 When I was finished, I tried sending and receiving.  Issues were found in Mode FT8.
In the FT8 mode, It was a bug that could not be transmit signal.


What would you do in this situation?

I doubted myself first.

1.The setting might be wrong.
- other version Installed and tested, it was perfect.
(using same configuration)

2.The compile might be wrong.
- I changed the compiler option, but the same thing happened.

3.The downloaded version is wrong. 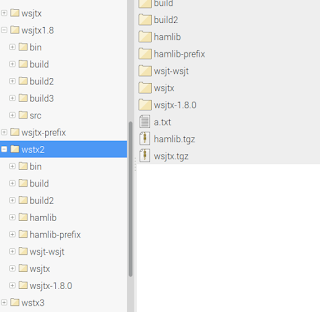 - As shown in the figure, I downloaded and tested the latest version that is not released yet, but the result was the same.
The day went by.

Why does the executable file compiler work fine?

5. When you came here, you have two choices.
Give up quickly or Trying a little more a day with issue.
While I analyzed wsjtx for the last two months, what I only saw was the library. In mainwindow.cpp I only saw library calls and subprocess calls.
What should I do?
In fact, there were always issues like this. Programmers are always thinking about this.


6. Yes, let's write a post that someone might be able to find useful.
Let's take this opportunity to write something that will help young developers.

Now let's find out the cause.

7. I always talk to college students or graduate students. It's very important to reduce the scope of doubt.

Can we try it?

8. Perhaps we'll ruin the source thoroughly. That's why we need to backup the source.
Clearly wsjtx's main source is mainwindow.cpp. And that's our target.

9. The size of the source(mainwindow.cpp) to be analyzed is too large?
So what's the first thing we should do?
Yes, Delete Lines.

What should we delete first?
If it was me, I would delete these first. (Outputting the log, controlling the radio, and so on.) So you don't know if I need it or not?(Could be deleted or not)

Don't worry about it. In that case, you can just delete it and then compile and run it.
deleted it and it did not compile or work?
We have two spleen weapons.
The first is CTRL + Z
The second is the backup source

So do not worry, let's delete lines.

Suddenly the problem was resolved while deleting the lines?
bingo
There will be a hint in the last deleted source. -> found
Unfortunately, I did not have such good luck.

Picture below shows I deleted the source.
Though we can delete the source, there should not be any errors. So just the lines in the functions can be deleted. 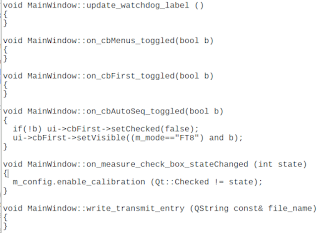 8. The length of the source didn't decrease enough?

- The second way is a way that can be used when debugging environment didn't built for some of many reasons. Like my situation in here.
- Now I'm going to find out where the problem is.

- We have to choose one word to trace.
(It can be a word that appears in gui.)

- Or we can find problem function.
- but it's very hard work.

So what should we do?

It's simple. You just have to modify the source code so that it can output external.
You can print to Textbox or to a file. I used printf because it's the simplest.

Type wsjt-x directly in the terminal window and hit enter to print the printf statement.


Then what should we do next?

Let's just put it in every function. If you put one on top of the function, you'll be able to put it in a minute. Picture below is what I did.

When I saw it, I pressed the Enabled TX button.

I found out that the execution of the transmitDisplay function is different.
Actually, I can not do that. Jt65 is sending and ft8 is not sending ...
Anyway, I found a big discovery.
And I tried to put a little more printf

This is the part. 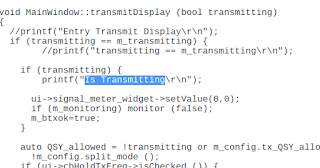 Then, in jt65, "Is Transmitting" appears and FT8 does not appear.

Now we have to search the word 'transmitDisplay'

That's only called from a function called

It only calls twice, good! 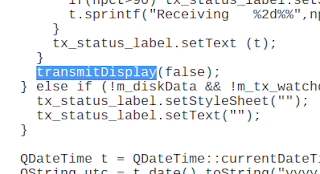 There is transmitdisplay (true) in the if statement below. (in guidisplay() function) 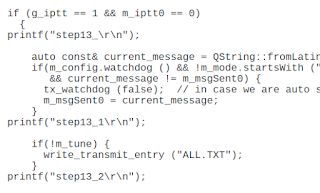 Now I've put printf in the middle of the source to print the status of g_iptt and m_iptt0.

And I got the results below.

found a difference in the processing of the JT65 and FT8.
Does your heart begin to swell?

Isn't the code dirty because of the printf statements? I wrote printf here and there to reduce the scope.

I actually noticed here what kind of bug actually is.
Perhaps if you were a C developer with using pointer, you might have noticed.
Pretend not to know for new programmer

The value of g_iptt has changed since calling 'genft8_' function.

I know that it was genft8 that I started to look at first before analyzing the ft8 protocol, but I'll look it up.

It's a commented below. It was commented out after the experiment.

The experiment was successful. I recovered the previous value and it worked. perfectly.
But this is not a problem. It's a temporary measure.
Should we open the Fortran source?

Usually when an external function is called but the value of the internal variable is changed, most of it is overflow.

So I compared the sizes one by one. 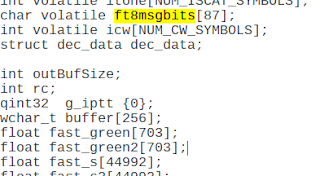 Now we can understand how the problem occurred. right?
ft8msgbits and g_iptt were nearby.

Someone here will say, 'Look, the location of the variable declaration in the source code is different than compiling it!'
But in my experience it's slightly different depending on the compiler, but most are listed as contiguous. Especially if you have done programs on both pc and embedded, you'll get better.

Below is the modified result video.

very simple? Yes!
As always, most bugs are hidden in a very little things.

Then what should we do?

Now let's apply it to the clean source we backed up.

So what do we do now?

That's right, thanks to the grateful developers for the bug reports and solutions we found.
Most large projects have this group activated. 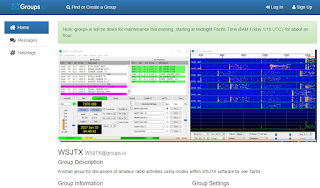 You want to report a bug first?
Excellent!
It's okay for anyone to go first, just let the developers know.
I am going to send bug report when I finish customizing.

This is a good thing about open source.

Thank you for reading it.
Ian KD8CEC

April 02, 2019
Release CEC Firmware v1.200 for uBITX All Version (include v2, v3, v4, v5) I did the firmware work for v5 when uBITX V5 was released, but I release it now. I received the feedback from a thankful beta tester and tested it myself by converting my uBITX v3 to v5 but I was not sure. I ordered the uBITX V5 and delivered the correct uBITX V5, so I made a little more fine-tuning. If you use V2, V3, V4, you do not need to update this firmware.
127 comments
Read more

April 13, 2018
How to connect SDR (RTL-SDR) to uBITX (uBITX Firmware CEC Version V1.071 Beta Release, At the end of the beta test, we will release to 1.08.) uBITX and SDR usage will be divided into several and will be posted. Some users have attempted to connect SDR to uBITX. I also supported SDR connections from uBITX since CEC Firmware 1.070 (Beta).
45 comments
Read more