First of all, Thank you for using the AA CEC Version firmware. I was going to develop it at a little bit faster until it was Version 1.0. But there were quite a few users out there. Thank you so much. In addition, several excellent testers have done various tests to help stabilize the firmware.

So I decided to divide the version into two. It is a stabilized version and a tester version.

1.About the stabilized version
The stabilization version will be upgraded if the safety is verified by testers. Therefore, the improvement of the function will be a little late. 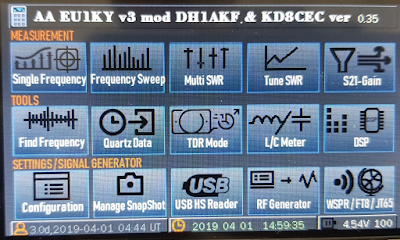 In some special conditions (SD-Card status-Capacity, bran, expansion of peripheral devices), the FAT information of the SD-Card has sometimes been erased. Most of the time, there was no big problem, but the computer did not recognize it. I looked at the latest version of the Fat Library, STM's HAL, and so on.

Although not accurate, I thought there was a problem with S-Ram and Fat Library compatibility on the STM32F746 board. They occurred mainly when peripheral devices such as RTC, External Sensors were attached.
This problem has been solved by manually managing memory.

More than 100,000 tests continued in various environments and all were Passed.
I would appreciate your participation in testing so far.
(The firmware must be used after formatting the memory card)

Test video
The SD-Card stress program I used will be ported to Version 0.35 and tested. I will test the stability of the firmware by using a significant amount of data on the obsolete SD-Card.

Version 0.34 (mar/27/2019)
Removed memory interference due to increased firmware size. In addition, the screen flicker has been solved.

Version 0.30
Base version. The V0.3x version retains the features of this version.
The stabilized version has not improved greatly in V0.30, so please refer to the link below for a description of the function.
http://www.hamskey.com/2019/03/release-firmware-cec-version-030-for.html


Thank you for using the firmware.

If you have extra time, I would appreciate it if you run the test version and feed back the results. There are no new test versions yet.

April 02, 2019
Release CEC Firmware v1.200 for uBITX All Version (include v2, v3, v4, v5) I did the firmware work for v5 when uBITX V5 was released, but I release it now. I received the feedback from a thankful beta tester and tested it myself by converting my uBITX v3 to v5 but I was not sure. I ordered the uBITX V5 and delivered the correct uBITX V5, so I made a little more fine-tuning. If you use V2, V3, V4, you do not need to update this firmware.
186 comments
Read more

June 24, 2019
Release EU1KY AA Firmware CEC Version 1.01 and 1.0a It is the stabilized final version of EU1KY AA. Updates starting with Version 0.1 continue to add features. Please refer to the link below for added features. I have separated the Version to 1.01 and 1.0A for users who want to use AA only for instrumentation purposes. *  If you want to use all the features added up to Version 0.71, please use Version 1.0A. *  If you want to use it only for instrument use, please use Version 1.01 Version V1.0A Version V1.01 1.Download Firmware Version 1.01 and 1.0a https://github.com/phdlee/antennaanalyzer/releases Version 1.01 (Version with only antenna analyzer function) https://github.com/phdlee/antennaanalyzer/releases/download/v1.01/AA_CEC_V1.01.zip Version 1.0A (Version with all features added up to Version 0.71) https://github.com/phdlee/antennaanalyzer/releases/download/v1.01/AA_CEC_V1.0A.zip ConvertRXP (Converters for using AA measurement data in other tool
177 comments
Read more